There’s something irresistible about military watches. The combination of toughness, clarity, accuracy and no-nonsense design is given additional weight by the incredible histories many have.

Christopher Ward boasts its own range of military timepieces that takes in mid-century design, contemporary aesthetics, and elite Swiss watchmaking.

The Military Collection is the result of a partnership between the company and Britain’s Ministry of Defence. Representing the Royal Navy, there’s the C65 Dartmouth; for the British Army, the C65 Sandhurst; the Royal Air Force (RAF), the C65 Cranwell; the Royal Marines, the C60 Lympstone; and for the Parachute Regiment, the C63 Colchester. Each is named after the services’ training academies.

“These watches have been created with approval from the Ministry of Defence, and they’re licensed to carry the insignia of the five Services,” says Christopher Ward co-founder Mike France. “We’re one of just five brands approved by His Majesty's Armed Forces to do this, so it’s a huge honour.”

Of the five pieces, three are influenced by iconic British military watches of the post-World War II era, while two are up-to–the-minute professional timing instruments.

The military watches come at the same accessible price – a touch under £1,000 – and use a version of the company’s Light-catcher™ case, in stainless steel, carbon, or bronze, containing a chronometer-certified version of Sellita’s SW200 movement.

“The greatest accuracy available was a prerequisite of any MOD watch of the past,” Mike says. “When we were working on this project, I kept thinking of all those classic war films with a military team synchronising their watches. It seemed important that we fitted as accurate a movement as we could.”

In terms of design, three of the watches speak the same pared-down language. The C65 Dartmouth watch references the classic Omega Seamaster 300 ‘Big Triangle’ of the 1960s, the C65 Sandhurst uses the Smiths W10, while the C65 Cranwell is inspired by two near-identical watches made in the late ’40s by Jaeger-LeCoultre and IWC – both called the Mark XI. All are finished to modern-day standards and are slightly larger than the originals, reflecting contemporary tastes.

In contrast, the C60 Lympstone and C63 Colchester, follow their own path, using ultra-modern materials and the latest engineering techniques.

The C60 Lympstone boasts a dial made from ultra-tough, ultra-light forged carbon and is also the first CW watch to house a rotating inner-bezel compass which lets you orientate yourself using the sun. The C63 Colchester is similarly forward-looking. Using the C63 Sealander Elite as its starting point, the watch is not only incredibly light (just 38g), but it's all-carbon construction makes it ultra-strong, too. And for added comfort, it boasts a retractable crown that sides into the 41mm case when not in use.

There’s no badge on the faces and they come on a variety of straps and bracelets; all quick-change. In many ways, though, the most important element is to the rear. “Five of the watches have a deep-stamped emblem on the backplate,” says CW head of product design Adrian Buchmann. “The only exception is the C63 Colchester, whose exhibition case back carries a ‘coin’ stamped with the insignia of the Paras.
Five great watches, then, but which are the team’s favourites? Adrian won’t be drawn, and Mike, too, admits that he keeps changing his mind. “My favourite is currently the Sandhurst Series 2”, he says. “But the Colchester is pushing it close – it’s just so comfortable to wear.”

Like the Services themselves, they’re leaders in their field: always ready for action and reliable whatever you put them through.

Just after World War II, the MOD – keen to improve the accuracy of RAF raids – set a new specification for military aviator’s watches aimed at bomber navigators, and commissioned two Swiss manufacturers to make them: Jaeger-LeCoultre and IWC. Both 6B/346 watches look near identical and are stone-cold classics, but while the IWC Mark XI is well regarded, the JLC Mark XI is even more so. Why? For a triple-whammy of reasons: it was made in much smaller numbers (under 3,000), it was never sold to the public, and it used the classic Calibre 488/SBr, a chronometer-quality movement with few contemporary peers.

“Both Mark XI watches are highly sought after,” Mike France says, “and though I’ve always been a sucker for any good-looking aviation watch, these really are something. It’s no surprise they’ve become perhaps the most collectable British Forces watches there’s ever been.”

Though it shares some of its aesthetic with the much later Smiths W10, the CW Army and Air Force watches are actually quite different in the flesh, not least that the RAF watch is larger, at 41mm. “And,” says Adrian Buchmann, “because it has no bezel it wears even larger than that, giving you a supremely graphic and legible face. On the back is the RAF’s heraldic badge.”

Just before Smiths – the last surviving British volume watchmaker of the era – shifted its entire operation into the more lucrative world of aerospace instruments, it made one last watch for the British Army: the 35mm stainless steel W10 general service field watch, manufactured from 1967-1970. Hamilton and others would also make W10s, but the Smiths is the one to have. “The story of this watch really grabbed me,” Mike France says. “We’ve got a great affection for Smiths, and it’s sad they abandoned creating watches so soon after making this.”

The Christopher Ward version is slightly larger than the original at 38mm, using the new C65 Vintage light-catcher™ case without a bezel. “Smiths was British and so are we. That’s why it was great to be able to reference the long tradition of watchmaking in the UK,” says Adrian. “This is the epitome of the simple, handsome three-hand watch. It has Arabic numerals, no date and a clean face; on the back, there’s the Army’s heraldic badge.”

The Omega Seamaster 300 was launched in 1957 and is an important watch in its own right. The sought after ‘Big Triangle‘ version, with the distinctive wedge of lume at 12 o’clock, was introduced during the 1967 production run to meet new MOD specs for military SM300s, but looked so good the design soon found itself into a small proportion of civilian versions too. “As soon as I saw the Omega Big Triangle I fell in love with it,” Mike France says, “and it’s a real favourite amongst military watch collectors. It’s that large chunk of lume at 12 o’clock that makes it so distinguished, so that became the key feature of our design. Our C65 Dartmouth uses the Aquitaine case in its 41mm form with a sapphire unidirectional bezel, and takes some design cues from our C60 Trident and the Aquitaine Collection too – notably the large triangular hour hand.”

This Omega Big Triangle was initially created to comply to MOD diver’s watch specification 0552, and other brands executed versions too – notably Rolex – but it’s the Big Triangle that captures the imagination. “I love it,” says Adrian Buchmann, “but I also love that we’ve added design elements of our own to the Dartmouth too. The dark blue face, for one thing, gives it a different feel to the original while, on the rear, there’s the crown insignia of the Royal Navy.”

Named after the Royal Marines’ training base in Devon, the 42mm C60 Lympstone is the perfect fusion of sleek, masculine design and contemporary Swiss watchmaking.

With a near-camouflage look, forged carbon is ideal for the C60 Lympstone’s dial. Made of chopped carbon fibres infused with resin (with around 500,000 fibres per square inch), it’s ultra-light – and reassuringly tough.

The C60 Lympstone also boasts a first for Christopher Ward: the inclusion of a rotating inner-bezel compass which lets you orientate yourself using the sun. And because this is a watch inspired by the Royal Marines, it’s also waterproof to 600m.

“We wanted to make a modern tool watch, fit for a modern force,” says Adrian Buchmann, head of product design at Christopher Ward. “We’ve taken materials inspiration from the tools the Royal Marines employ; forged carbon is a material used in weapons – that’s why we made a dial from it. Cordura®, the advanced fabric we’ve used for the strap, is supplied to the military, so it’s incredibly tough.”

Finally, the watch carries the insignia of the Royal Marines, laser-engraved into the caseback. Something that was only possible with the official approval of the Ministry of Defence.

How do you pay tribute to the Parachute Regiment, one of the most respected military units in the world? We think that a watch like the C63 Colchester fits the bill.
Inspired by the Paras, this unique 41mm timepiece brings advanced material technology together with the finest Swiss watchmaking. And thanks to its all-carbon construction, it’s both incredibly light (just 38g) and unbelievably strong.

The high-beat chronometer movement provides supreme accuracy when you need it, while Super-LumiNova®-coated indexes and handset deliver high-visibility timekeeping in low light.

“The C63 Colchester could be the most sophisticated watch we’ve ever made,” says Mike France, Christopher Ward CEO and co-founder. “When they’re jumping out of a plane, the Paras need kit that’s strong and light. That’s why we chose the C63 Sealander Elite as the template for the C63 Colchester. It struck both us and the regiment that weight, durability, strength, comfort and technicality were critical. And the Elite delivered all that.”

For those who value comfort, the all-new carbon case (unique to the C63 Colchester) sits snug on the wrist, while the ingenious pop-out crown stops any digging-in at moments of strenuous activity.

Perfect: whether you’re a Para or just an admirer. 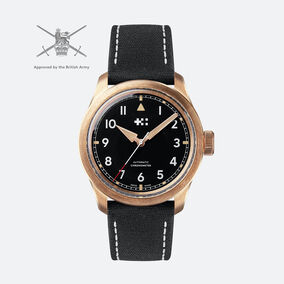 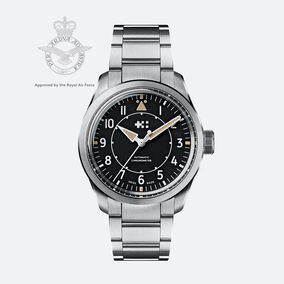